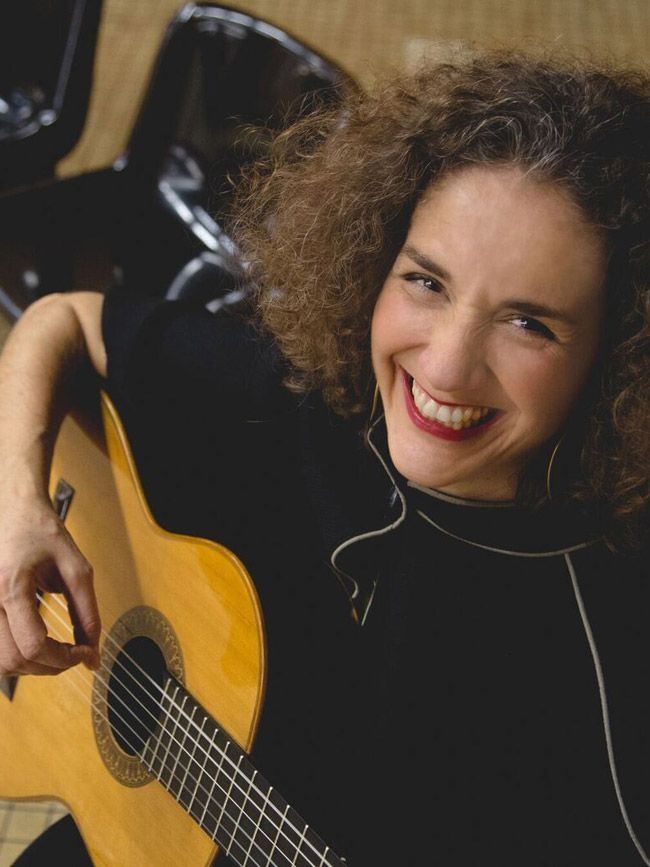 Acclaimed by the New York Times as “An eloquent player with a graceful touch and a rich sound” Antigoni Goni is “Undoubtedly one of today's most compelling talents.” Guitar Review

The Greek guitarist, Antigoni Goni enjoys a truly international career, performing extensively in Europe, Russia, the Americas, and the Far East, both as a recitalist and soloist.

In 1995, to an already long list of international competition prizes she added the first prize of the Guitar Foundation of Americas (GFA), thus becoming the first and only Greek guitarist to ever conquer it. She regularly performs in major concert halls such as the Concertgebouw in Amsterdam, the Covent Garden and the Wigmore Hall in London, Gasteig Hall in Munich, the Megaron and the Odeon of Herodes Atticus in Acropolis (Athens) as well as the Philharmonic and the Cappella Sale in St. Petersburg and the Bolshoi Theater in Moscow, or, in the US, the Weill Recital Hall in Carnegie Hall, Alice Tully Hall and the Juilliard Theater in New York City, Spivey Hall in Atlanta, Benaroya Hall in Seattle and Herbst Theatre in San Francisco.

A former student of great masters such as Evangelos Assimakopoulos, Julian Bream, Oscar Ghiglia, Sharon Isbin and John Mills, she regularly brings her internationally acclaimed expertise to universities and academies around the world, and she is a regular jury member to prestigious international competitions.

A NAXOS and KOCH recording artist, her highly successful recordings have been praised for being "expressively poetic and technically exciting" and have been received with great enthusiasm by the international musical community. At least a dozen of the pieces she has recorded, have been included in Enrique Robichaud’s classical guitar Cd guide: Guitar’s TOP 100. Best.

Founder and Chair of the Guitar Department, Pre-College Division, at the Juilliard School of Music, (1995-2005), from 1999 until 2005 she also taught as an adjunct professor at the Columbia University. Between 2000 and 2005 she was Artist in Residence with San Francisco Performances. For her International achievements, the Royal Academy of Music in London awarded her with the honorary position of Associate Professor (ARAM).

Since 2004, she is the Professor of Guitar at the Koninklijk Conservatorium in Brussels and since 2007 she is the founder and artistic director of “the Volterra Project, Summer Guitar Institute”, a workshop bringing together, every summer, international students and professionals of the highest calibre for 10 days of intense study and inspired performances.

Antigoni Goni is currently leaving in Brussels, Belgium, with her husband and two daughters.

Jeff Bowman was born into a Military family in Ottawa Ontario. His father was posted to France, Nova Scotia, and Ontario, Saskatchewan and eventually to British Columbia. A child of the 60's and unaware of the Cold War, Jeff had begun learning guitar from Mr. Bob Wilson. Mr. Wilson was a musician/Military Radar Technician on the Canadian Forces Station known as Dana Saskatchewan. The isolated nature of this Cold War Radar Site led to many hours of practice that began a lifetime of music for Jeff.

He attended the Music programs in Capilano College studying Classical Guitar with Stephen Boswell and The Vancouver Academy of Music studying the Trombone with Mr. Greg Cox of the VSO. Jeff Bowman has also studied jazz guitar with the great Oliver Gannon.

He has played at the Merritt Country Music Fest 1999 with the Debbie Bergeron Band, performed with his own band at the Hope Mountain Blues Fest 2004, performed in Chilliwack's 2005 Dixie Fest with Craig Scott and Yve Evans. Was guest clinician at Kwantlen Polytechnic University’s Guitar Fest 2005 and 2009. Was the 2007 Guitar adjudicator at the Upper Fraser Valley Music Festival. He played guitar for the Fraser Valley University's West Side Story production in the summer of 2006. Jeff has performed with Blues Harpist, Darrell Mansfield in Summer of 2011 at the Party in The Park event and Back To Blues Festival in Chilliwack. In August 2014 also performing with Jack Jackson in Northern and Interior BC. Jeff continues to perform at private and social events in the Fraser Valley and Vancouver areas.

Jeff Bowman has made his living teaching music in Chilliwack and the Fraser Valley and Vancouver areas for over 40 years.

Les Finnigan has independently released 7 CDs and 2 DVDs and has sold over 15,000 copies to fans all over the world. He is regularly heard across Canada on several CBC Radio programs. His music has also been used in films, documentaries and television commercials. He is a tireless entertainer and performs over 325 days a year at venues ranging from coffee shops and restaurants to concert halls and outdoor festivals. He is also the producer of the West Coast Guitar Night, which has been a popular annual concert in Vancouver since 1999.

Three of his albums have been nominated for awards: two Western Canadian Music Award nominations (Instrumental Album of the Year - 2014 and Outstanding Instrumental Recording - 2003), and a 2007 Canadian Folk Music Award nomination for Best Instrumentalist - Solo. Before Finnigan started his recording career he was the winner of the National Guitar Summer Workshop's Guitar Competition in 1996 and also the Vancouver Unplugged Guitar Competition in 1996.

He studied at Douglas Academy of Music with David Lund, at the Institute of Communication Arts, and has attended workshops with Leo Kottke, Alex DeGrassi, Pierre Bensusan, Adrian Legg, Martin Simpson, Preston Reed, Ed Gerhard, Seth Austen, Don Ross, Tommy Emmanuel & Kent Hillman. He started playing electric guitar in 1980 and made the permanent switch to acoustic in 1995. He has extensively studied classical counterpoint and jazz harmony, and also played the acoustic drum kit for about 10 years. These individual studies of melody, harmony, and rhythm, combined with his artistic sense of structure and balance, have made him the composer he is today.

"Les Finnigan has been described as a guitar wizard and he gives ample evidence of why - his original instrumentals, employing alternative tunings, are consistently fascinating, and his playing combines leads, complex accompaniment and an unerring beat in such a way that the word soloist seems all wrong."

"Once released from the constraints of standard guitar tuning a player with good ears and hands can make amazing music, something Vancouver guitarist Les Finnigan has clearly figured out. His fingers don't just play, they dance."

"Finnigan's use of the tonal palette of his 6-string creates aural images that are at the same time warm and inviting, and dark and complex. It's like a picture of life within a song: beauty tinged with sorrow at unexpected places."

"Finnigan stands revealed as a gifted stylist and perhaps an even more talented composer."

"Finnigan specializes in pretty guitar tunes that could tame such savage beasts."

"Finnigan's music is at times soothing, uplifting, exciting and melancholy."