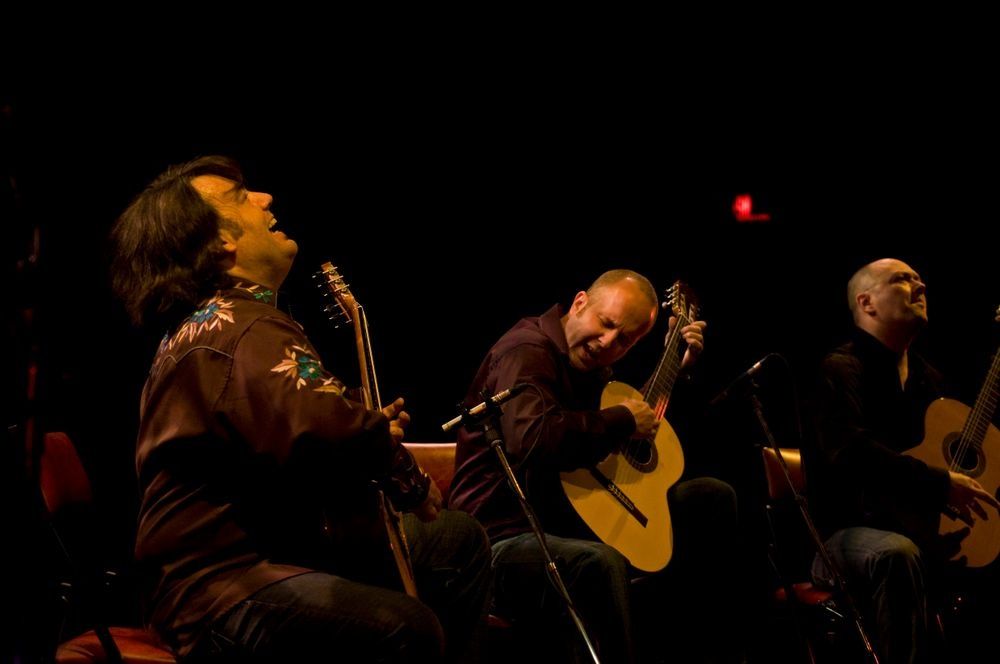 Described by the CBC as "the hottest guitar ensemble in Canada", the MG3 has quickly established itself as a force of rejuvenation and cross-pollenization between various musical forms. Marrying passionate virtuosity with a stealthy sense of humour, guitarists Glenn Lévesque, Marc Morin and Sébastien Dufour at once charmed the ears of seasoned critics and captured the hearts of their (now ever-expanding) audiences.

The Trio's eclectic, energetic music takes listeners on a journey through the world's many cultures—from the mysterious, exotic melodies of India to the hot rhythms of South America, Spain, the Balkans, the Orient and traditional Quebec and…Hollywood.

Since it was founded at University of Montréal in 1998, the MG3 has given hundreds of concerts in North America and Europe, many of which have been recorded and broadcast by national networks such as CBC, BRAVO, Radio-France, the Romanian National Television and Société Radio-Canada. Its 2002 concert, entitled "The heat of the Day," and performed in Montreal, was nominated for Concert of the Year (Jazz and World Music) at the prestigious Prix Opus 2002, celebrating musical excellence in Quebec. This concert launched the Trio's second album, Garam Masala, which was also nominated for Disk of the Year (J&WM). Their 3rd CD has been released in Fall 2006. 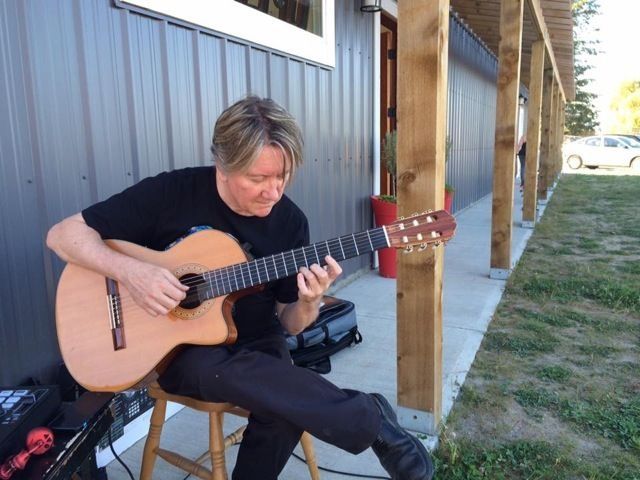 James Devon was born in England and started learning classical guitar at the age of 15. One year later, he was awarded a scholarship for musical education at a college in Lincolnshire where he studied with legendary classical guitarist Graham Wade. James continued his studies in musical theory, piano and guitar at Trinity College of Music in London. He taught guitar in British schools and colleges, before emigrating to Canada. His desire to learn and play blues and rock on the electric guitar as a freer form of musical expression, added to his musical understanding. Several years later, he won a Fender sponsored guitar competition for the province of British Columbia.

Aside from working as a private guitar instructor, James was one of the first musicians to produce a series of video guitar lessons including “Beginner’s Guitar” and “Improvising Rock Guitar Leads”. He later created the internet's first interactive online guitar lessons that were highlighted in the Jan. 2000 issue of Guitar Player magazine. These lessons branched out to become www.eyeguitar.com.

Lately, James has been working on a Mac based recording studio to write and produce original music. He continues to perform, record and teach in the Vancouver area of British Columbia, Canada and is currently working on producing more instructional on-line musical material, and new musical compositions. 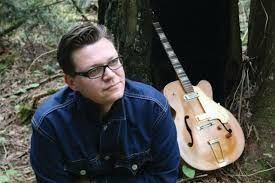 Paul Pigat started playing the guitar at 11 years of age and was gigging steadily in downtown Toronto by the time he was 12. Through a lifetime dedication to live performance, recording and study he has developed into a superb guitarist, vocalist and songwriter. Paul attended the Claude Watson School of the Arts and graduated from the University of Toronto with a Bachelor of Music in theory and composition in 1992. He taught at the Eli Kassner Guitar Academy while continuing to explore live performance opportunities with various bands. Shortly thereafter Paul headed for the west coast, where he has made his home since 1994, and has earned a reputation as one of the best guitarists around.

An extremely versatile artist, with projects ranging from delta blues to classical music, he heads four diverse Vancouver bands and is in high demand as a sideman, having recorded and toured with the likes of Neko Case, Michael Kaeshammer, and Carolyn Mark, and has shared the stage with Taj Mahal, Mae Moore, Lee Aaron, the Blind Boys of Alabama, Joshua Redman, Big Sandy and His Flyrite Boys, Aaron Neville, Jim Byrnes, Zubot & Dawson, and more. He has played performance venues ranging from small clubs to large stadiums, and festivals covering the entire spectrum of roots, blues, rockabilly and jazz music. He toured the UK with Neko Case in November 2006, and had the honour of performing with Jim Byrnes and Jesse Zubot at the Closing Ceremonies of the 2006 Torino Paralympic Games earlier in the year. 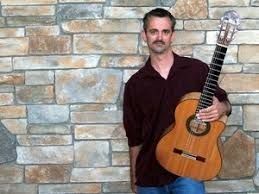 The word duende is used to describe music that moves both body and soul. Fueled by his passion and talent, Doug Towle has tapped into this dark magnetic energy which springs up from the earth through the souls of your feet. The music is jazz-infused rumba flamenca with a dash of modern world beat.

Already at the age of twelve Doug was emulating the masters like Al Dimeola and Paco de Lucia. As his obsession with the acoustic guitar grew the instrument began to give up its secrets, enabling Doug to delve further into its melodic, rhythmic and percussive possibilities. He has now found a wonderful vehicle for both his compositions and musicianship, as he continues to explore the power and passion of the acoustic guitar.

Under the moniker “De La Terra” he released his first independent CD “Lluvia” in 2001. Hethen took to the stage and quickly became one of the most refined and dynamic acts in Western Canada. The highly anticipated second De La Terra album “Rhythm and Passion" released in 2003 has received glowing reviews from press and radio and has sold units into the thousands. The latest effort “Momentum” was released in the fall of 2006 and continues to win new fans all over.

Doug has appeared at such events as the Vancouver International Jazz Festival, the Harrison Festival of the Arts, the Kispiox Festival, the Maple Ridge Jazz Fest, the Juan De Fuca Festival of the Arts and the Zihuatenejo International Guitar Festival. He has performed all over Canada as well as America and Mexico. Recently (Fall 2009), Doug Towle was a finalist in the Guitar Player Magazine Superstar competition.

Doug Towle is one of the most unique live acts going. An amazing mix of styles and genres, their instrumental songs range from haunting and romantic to infectiously energetic. They've been a hit with people of all ages and walks of life and are sure to please anyone who experiences one his dynamic performances. 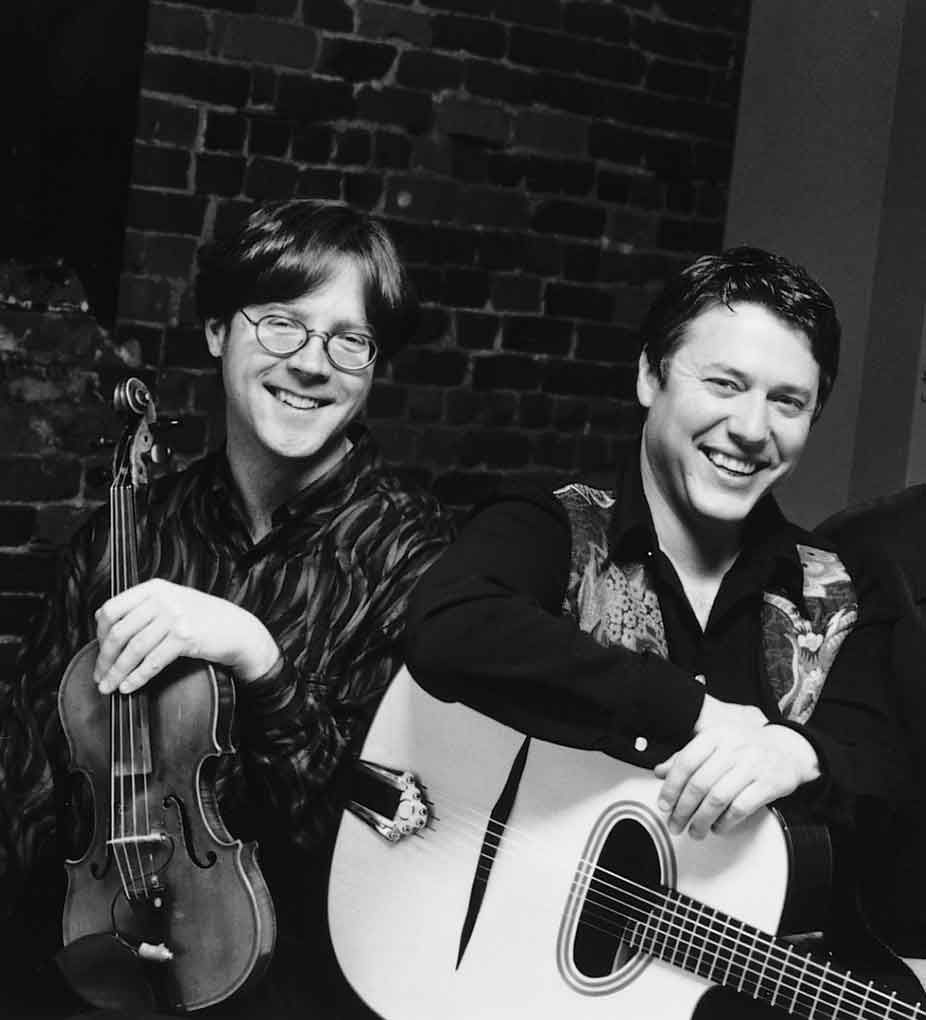 Budge Schachte (guitar) has worked with a stellar cast of diverse artists including: play-write Thompson Highway, Tango Paradiso, Victoria Symphony, Chor Leoni Mens Choir, WIndsor Symphony, Ache Brazil, Coco Trevisano, Jesse Zubot, Sal Ferreras, Brad Turner, Saul Berson, John Korsrud, Olam, Leora Cashe, and many others. He is featured on several film soundtracks: Head In The Clouds, Eulogy, Sisterhood Of The Travelling Pants and recently he composed, played and recorded his first feature film soundtrack for the film, "Love And Other Dilemmas". His work as a performer, producer and composer can be found on numerous recordings, radio and television appearances. He has twice been reviewed in Downbeat Magazine. Budge is on the faculty of Guitar Workshop Plus where he has taught a "Gypsy Jazz Seminar" along with guitarist John Jorgenson.

Budge co-leads along with Cameron Wilson the Gypsy Jazz group "Van Django" an acoustic string ensemble. They have recorded two live CBC radio shows for "Hot Air" and "Westcoast Performance". Since the group’s formation they have toured throughout Canada and more recently, have been making inroads internationally with forays into the USA and beyond. May 2009 will see Van Django travel to Ireland for their very first tour in Europe. Van Django recorded their first CD "Tiptoe Trip" in Spring 2006. They're 2nd CD is due to be released winter 2009.

Cameron Wilson (violin) is an artist whose works showcase the many genres of music he has become associated with both as a composer and violinist. His compositions have been performed by the CBC Radio Orchestra, the Vancouver Bach Choir, the Vancouver Cantata Singers, the Art of Time Ensemble, Symphony Nova Scotia, the Louisiana Philharmonic, the Firebird Ensemble and various ensembles and soloists across North America. His compositions have been heard on CBC Radio, NPR, BBC, and RTE Lyric FM in Ireland. He has written music for films including "Singing the Bones", and most recently, the score for the National Film Board documentary film, "Citizen Sam". The music was nominated for a 2007 Leo Award for best music in a documentary film. He has collaborated with CBC author and storyteller Stuart Mclean, Canada's poet laureate, George Bowering, soprano Jean Stilwell, poet Lorna Crozier and CBC's Bill Richardson.

He was a long time member of the Vancouver Symphony Orchestra from 1988-2007. He was also a member of the CBC Radio Orchestra. He is currently a member of Joe Trio, the classical crossover piano trio, Van Django, the acoustic string gypsy jazz quartet and the Hard Rubber Orchestra.