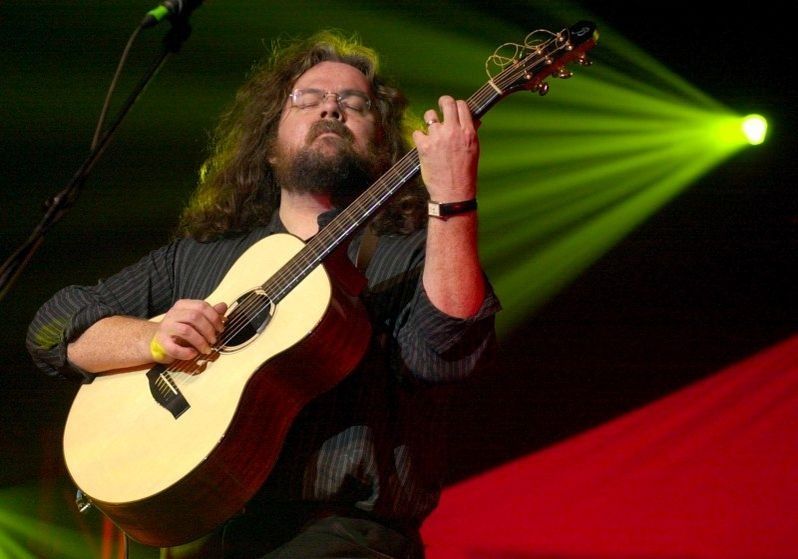 One of today's true innovators of guitar composition and technique, Don Ross has emerged as one of the most respected musicians in Canada and one of the top guitarists in the world. In September 1996, he managed to do what no other player has done: win the prestigious U.S. National Fingerstyle Guitar Championship for the second time (he first won in 1988). The competition, held yearly in Winfield, Kansas, cannot be won only with immaculate technique, but the player's music must also display a high degree of emotion and intensity-hallmarks of Don's style. The son of a Scottish immigrant father and a Mikm'aq aboriginal mother, Don was born in 1960 into a musical family. He first started experimenting with the solo possibilities of the acoustic guitar at the age of eight. By age ten he was playing in alternate tunings and exploring "fingerstyle" technique, a right hand discipline similar to classical guitar playing. Preferring to write original music and develop a personal style, Don's self-taught journey on the instrument has encouraged him to follow his musical intuition. The result is an unclassifiable musical style that borrows from jazz, folk, rock and classical music. When asked, Don usually pigeonholes his music as "Heavy Wood!" Don graduated from the Music Department of Toronto's York University in 1983, but waited until 1986 to start pursuing a career as a performer. After his first win at Winfield, Don was asked to sign with Duke Street Records. He recorded three CDs for Duke Street over the course of the next four years: Bearing Straight, Don Ross and Three Hands. The CDs met with unanimous critical acclaim and numerous tours across Canada and the U.S. Don even played at the Montreux Jazz Festival in Switzerland.

Don signed a new recording deal with Columbia/Sony Music in 1994, releasing his first album for the label, This Dragon Won't Sleep, in 1995. Since the album's release, Don has toured extensively, including six tours of Germany with Vancouver singer/guitarist Michael Friedman. In the fall of 1996 Don released Wintertide, an instrumental album of traditional Christmas tunes played in his trademark style. Lynn Saxberg of the Ottawa Citizen called the CD a "masterpiece," and the public response was no less enthusiastic.

Don's next record, Loaded. Leather. Moonroof. was released in November, 1997. The album ".is another chapter in [his] exploration for a rich sense of harmony and groove," according to Don. The CD treats Don's listeners to a compilation of diverse sounds that reflects his influence by all types of music. On this album, Don passionately plays the six-string and seven-string guitars as well as the dobro. He is often accompanied by several other musicians whom all add their specialty. Don considers the first track, "Loaded. Leather. Moonroof." the most powerful tune he has recorded to date, due partly to a great solo by bassist Mark Egan, who asked to play with Don last year. Mark's previous work includes collaborations with guitar great Pat Metheny, singer Joan Osbourne and countless others. The collection of tunes on Loaded. Leather. Moonroof. carries Don further past the usual style boundaries associated with acoustic music, proving that he is certainly not just a folk musician, but rather a modern music man. In late 1998, Don was voted Toronto's Favourite Local Guitarist by the readers of NOW Magazine, an influential news and entertainment paper.

Don's Passion Session CD, recorded in Berlin's Passionskirche, was released in March 1999 on Narada/Virgin Records. The recording brings Don back to his roots as a solo fingerstyle guitarist, as he produces his first totally solo album ever for Narada's Masters of Acoustic Guitar series. Don got the news of the offer of a new contract with Narada while on tour in Germany in November 1998. The planned release date for his first CD for the company was so soon that he decided to team up with his recording engineer friend Knut Becker right away and record the album straight to two-track digital through a Schoeps stereo microphone in the acoustically perfect confines of the Passionskirche (The Church of the Passion) in Berlin's funky Kreuzberg neighbourhood. The Passionskirche is of course used for sacred services but also serves many evenings a week as a live music venue, hosting jazz acts and chamber ensembles from around the world. Berliners consider it one of their best venues both in terms of atmosphere and acoustics. The eleven tracks on Passion Session comprise some of the best pieces for solo guitar that Don has composed. Nine brand new titles (written mostly while touring in Europe) are complemented by Don's own "First Ride" (a perennial favourite with his fans and now brought to a wider audience), and David Essig's classic "Berkley Springs."

Don's latest recording, Huron Street, is comprised of 12 new recordings of pieces already familiar to his fans in Canada. Since the tunes originally appeared on CDs that were only ever released in Canada, Don decided to make some of his favourite earlier pieces available to the wider audience he reaches through his association with Narada Records. All 12 performances are new ones, each taking a unique twist on the tunes: some of these have appeared before as ensemble pieces and are now captured solo. Two pieces that were originally recorded solo are now presented as duets with amazing young upright bassist Jordan O'Connor. Certain compositions originally recorded on the standard guitar are now played on the baritone. The reaction has been very positive, with Huron Street reaching the Top Ten on Billboard's New Age chart this past summer.

Don has spent the last 20 years living in Toronto, New York, Alberta and Massachusetts. He and his family recently moved to a small village northeast of Toronto. 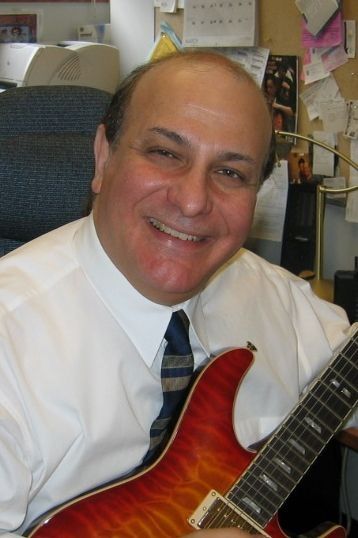 Dr. Peter Gouzouasis is the Coordinator for Music Education at the University of British Columbia. His numerous experiences with guitar include jazz studies with Joe Federico, Tom Giacabetti, and Joe Sgro, and Dennis Sandole and classical studies with David Baskin and Peter Segal. Before moving to British Columbia in 1990, Peter performed with national tours of Broadway shows, big bands, rock groups, and jazz combos all over North America, and has taught private and class guitar from middle school though university levels.